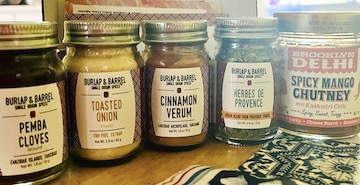 I just got my first box of spices from Burlap & Barrel. I debated joining. Was it worth it? Is it worth it? Shouldn’t I be supporting my local spice people? I just couldn’t resit getting a box at least once.

Included in this box:

Toasted Onion- Will definitely use this one

I got a jar of Spicy Mango Chutney and recipes for the spices. I look forward to trying a few of them.

One of the reasons I signed up for the spice club was INSPIRATION to do more cooking. Sometimes I just burn out like I’m sure the rest of you do…especially after the Shut Down along with NOT eating out like we all used to. I’m still in PHASE- NOT EATING INDOORS. I have to have a patio or forget it. (BUT now they say the summer Covid surge is over….so maybe….)

How did I hear about Burlap and Barrel? I was at a craft show at Ft. Mason in SF. I was thrilled talking to them when they told me they were in the BEAN CLUB as well. I  don’t remember how we got on that subject, but HOW MANY PEOPLE do you know in the Bean Club??

Speaking of Rancho Gordon, Steve Sancho has been doing 20 minute live video chats on Instagram. He had Burlap and Barrel on as guests cooking. That’s how I found out about the Spice Club. The videos are still up on Instagram if you are interested. They are very informative! I love Steve! It was so funny when Steve asked Burlap and Barrel WHERE did they get the idea for a spice club?

For the quality of the spices, the Spice Club is worth it! Check it out when you get a chance.

BUT I have a local spice shop. A buddy gave me a set of some of their great spices for holidays this past year. I LOVE them. I recently ordered from them and yes I SHOULD have went to the shop. I will be testing them out and let you know.